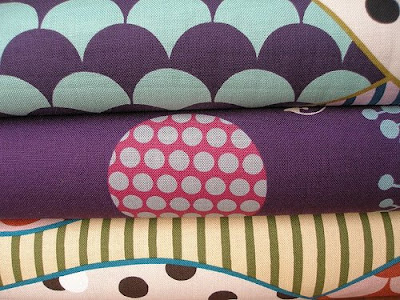 Okay. A clutch purse for a friend.

My friend requested I make her a small clutch (after I nagged her to let me make her something. I suspect she was hesitatant about ending up with something very strange. You know -- a tea-cozy with pom-pom trim and ric-rac edges and....hey, wait a minute, that sounds good.)

Anyway. After some hemming and hawing, she was visiting recently and we chose this Echino Dots Japanese fabric (the purple one in the middle...and it has bird on it, too) - I'd had a piece left over from my original purchase from the workroom (that's their photo, above).

Originally I bought it to make a pillow, but it seemed kind of wrong for it, for some reason...then I cut into it to make a pencil case for my husband - never used -- I mean, how often does the guy need a pencil case? So then I had a fat chunk -- maybe 1/3 a yard. I pulled it out when H. was here and she took one look and said, "Yes. Let's do it."

So I started a simple, "easy-peasy" clutch, no pattern, no instructions, I mean, heck, it's only an envelope, lined with a zipper, so things don't fall out when she's dancing the night away, right? I wanted to dive in and figure it out as I went along. No problem. 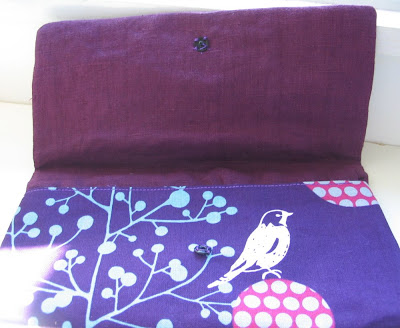 I had made nice headway... lined the flap and now to stuff the lining into the main part and stitch it together. I'd made an inside-out pencil-case type structure.

So. By then I had almost finished installing the purple linen lining (that had a zipped part) when I tested the zip, running it along, smooth, smooth, nice, then...air. 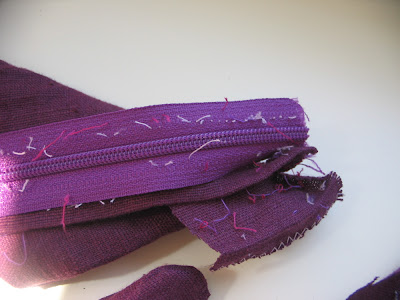 How dumb was that? This rendered the newly-installed zipper USELESS. No matter how much I tried to jam the zip-pull back on -- no way was it going back on.

So - I had to take an hour to remove newly installed liner pouch with zipper. So very joyful I'd sewn it in so securely... :[ 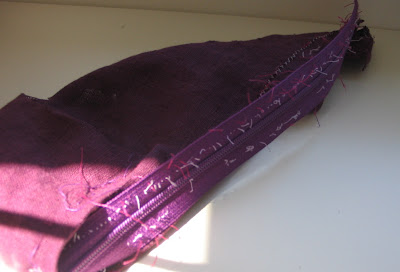 I seam ripped for an hour watching some dumb TV show. Canada's Top Model? I forget.

So then, guiltily recalling how H had said "I don't need a zipper, really I don't", I decided to take her up on her word. I left the zipper behind and did a pouch with snap. No zip -- and had to cut out the crazy custom embroidered pocket and sew it inside all over again -- which actually created a second interior pocket. Long story.

Notice the crazy "HG" embroidery - I was fooling around with an idea and it only warranted appearance on the inside of a purse. So, here's the finished product: 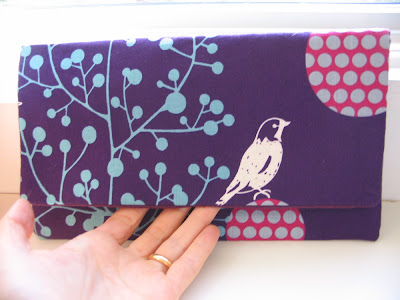 I used the rest of the Echino fabric for the pocket this time. 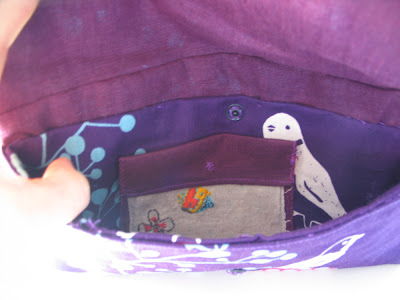 At least now H. gets a little owl peeking at her every time she reaches for her lipstick. 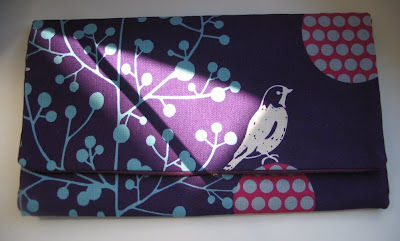 Have a lovely Tuesday.

ps
Would anyone be interested in an "I learned the hard way" tutorial? Where I create a pattern, describe the interfacing and everything? It would be fun to do a tutorial.

JuliaB said…
Nice bag! Yes, ofcourse you should do a tutorial. They are always handy to refer back to! I am always forgetting how I did things!! Thanks for dropping by my blog earlier. Glad you liked it!
18 August 2008 at 17:36

Spring Got Eaten Up!

AFTER A NINE YEAR BREAK